Guide is out of date. Read this page instead for information and deals on bikes in NL.

There are more bikes in the Netherlands than people. If you are a new expat or student living here then you will need a bike too. This is my list of 5 bike deals that are affordable for students and expats on a budget, but without letting you get ripped off or end up with a probably-stolen-piece-of-junk-useless bike.

Rule #1: Don’t get a Swapfiets if you want to save money in the long term

Swapfiets is a bike subscription service that offers a Dutch-style bike for 17 Euros per month. Over a year this comes to over 200 Euros once you include the set up cost. You’ll see a lot of people using Swapfiets in cities like Amsterdam, but if you want to actually save money, this isn’t the best option. Why not? Because for 200 Euros you will lease the bike for 12 months, while you could have bought one, which you can then sell once you’re studies are over, you get tired of living in the Netherlands, or you get kicked out after Brexit. Anyway here are the best bike deals for under €200 after which you can sell your bike to someone else.

50% off the Spirit Omafiets. This is a classic Dutch town bike for both men and women. 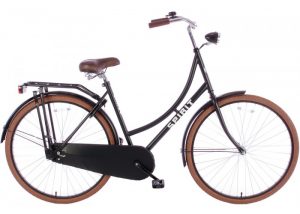 Omafiets-online have great customer service you can contact and they also provide free delivery 6 days a week (Monday to Saturday).

The bicycle is delivered in a sealed box, so you must assemble the front wheel, handlebars, saddle and pedals yourself upon receipt. You can also specify which day you want it delivered.

The best cheap new bike deal I have found in the Netherlands is the Progress Bike sold by Bol.com

Buying a bike online is a cheap and easy way to get a nice new bike. Bol.com sell a variety of Dutch-style bikes that you can get delivered for free, with free returns and warranty protection.

Omafiets have in-built brakes that you operate with the pedals and are the standard Dutch town bike that 99% of people ride around on. They are sturdy, reliable, and weatherproof so that you can buy one and then sell it when you are ready to leave the Netherlands.

This is the cheap alternative to paying for a Swapfiets subscription, because you can always sell your bike later while Swapfiets will cost you almost 200 Euro over 2 years and you won’t own the bike.

You will have to do some assembly of the bike once it is delivered but it isn’t complicated and full instructions are provided. See the reviews on Bol to get an idea about this. 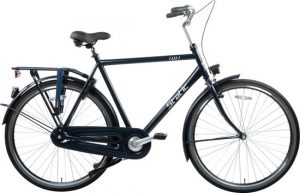 If you are a man and feel uncomfortable riding a “Granny bike” because it feels emasculating then you may want to pay an extra €40 for a herenfiets (MAN bike) instead.

The Herenfiets Jeans Blauw, or “Blue Jeans Man Bike”, is ideal for classic blue-jean-wearing men need a stolid bike to get around town when their Harley Davidson is being repaired.

Like the Progress Bike this is a sturdy steel-framed bike with a closed chain guard making it very low maintenance and weather proof. It also has 30 day returns, a warranty, and free delivery.

Also like the Progress Bike you will have to partly assemble it yourself once it is delivered. Read the description on Bol.com to get an idea of what this entails. I am assured it isn’t too complicated – especially for a real man who knows what he is doing.

The best second-hand, super-normaal bikes from €150 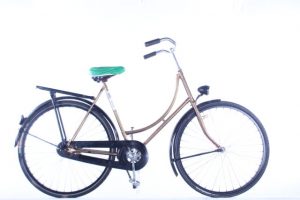 You will notice that most Dutch people’s bikes have a beaten up scrappy chic look to them rather than being shiny new models. If you really want to fit in among your fellow cyclists then you have to get a second-hand bike.*

The best online bike shop for extremely cheap and reliable second-hand bikes is CheapAssBikes.nl, for the following reasons:

Here’s a link to their omafiets ordered by price where you can find a good bike for as little as €150 plus a delivery fee of 14.95.

*To get this aged bike look you can also buy a new bike and throw it in the canal. Ask the council to fish it out, then throw it down some steps and hit it with a hammer until you achieve an authentic worn-in look.

For younger readers there are also such thing as shops that are not on the internet but exist IRL (in real life). They are located in streets outside and you have to physically go out and walk to the shop.

One advantage here is that you can see and test these bikes out before you buy, plus you’ll get to know your local bike repair person. The catch is that you’ll pay considerably more – around €250-€300 for a bike. However, you’ll get a very well set up bike and will be able to sell it back to them when you are finished.

For buying a cheap bike, many people will tell you to to Facebook groups dedicated to selling bikes in Amsterdam and other cities. I can’t recommend this: in my experience these groups are full of scammers and people selling very dodgy and/or stolen bikes. If you don’t like being ripped off or listening to people’s long backstories of how they acquired their bikes and how their dog died and so on, I’d say avoid this marketplace.

The other option is to ask around your neighbours and friends if you know anyone who has a bike. One way to do this is joining a local neighbourhood Facebook group, or using the local social network site Nextdoor, which is popular here.

I recommend buying a bike online as a cheaper option, or from a local bike shop if you don’t mind spending a little extra – they may even have some reasonable deals.